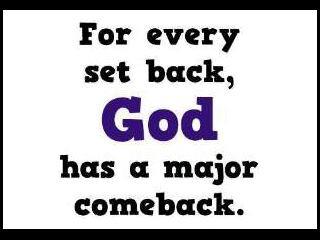 ".....:and they two stood by Jordan. And Elijah took his mantle, and wrapped it together, and smote the waters, and they were divided hither and thither, so that they two went over on dry ground. And it came to pass, when they were gone over, that Elijah said unto Elisha, Ask what I shall do for thee, before I be taken away from thee. And Elisha said, I pray thee, let a double portion of thy spirit be upon me......He took up also the mantle of Elijah that fell from him, and went back, and stood by the bank of Jordan; And he took the mantle of Elijah that fell from him, and smote the waters, and he said, Where is the Lord God of Elijah? and when he also had smitten the waters, they parted hither and thither: and Elisha went over." (11 Kings 2: 7-9, 13-14) Read also Joshua 3

As the title of today's article says, "The Journey To Your Restoration ~ On The Other Side Of Your Jordan," we can only hope that as this particular journey nears its completion, that you were making arrangements all along to cross over on the other side of your spiritual Jordan and you are ready for what awaits you there. Within the context of the word and therein implied, it is the completion of one assignment and the expectation of the next which is to come. It strongly suggests that there is a shift into another dimension for which God had all this time been preparing you and I to meet. It is suggestive of another crossroad in our lives for which there are two ways, that is, the one that lies before us (future) and the one that is behind us (past) and the middle (present) which is where we are at this moment in time.  But before I proceed any further, let me briefly recap some of the events and detail by way of its meaning the importance of Jordan River and the spiritual connection that it has to each of us.

Speaking of the Jordan River - the name Jordan means "descending, downward flowing." It is a natural barrier between the eastern desert and the western fertile country. (a promised land) In addition, Jordan represents a boundary, as well as being known as a popular site for miracles, transitions, and shifting paradigms. Change always accompanied the Jordan as it marked some of God's most propitious events.

In summary, Joshua 3  and the ones that follow, gives an account of the history of Israel's passing through Jordan into Canaan. (the latter being the land which God had promised) Some time after they are put in remembrance of what God did for them between Shit-tim and Gilgal where they next pitched. Next, the march up to the river side of Jordan, hoping that you already read the scripture, was at Joshua's order (v 1). Their journey caused them to pass through the Red Sea unexpectedly  (which points to their redemption). Their expectations raised with regards to the thought of now having to pass through Jordan because they remembered how the Almighty power had led them through the Red Sea.  In their crossing over the Jordan, they were directed to (a) follow the ark of the covenant, and by depending on it, they were in fact depending upon God Himself (v2-4); (b) The people were commanded to sanctify themselves (v5); (c) The priests with the ark were ordered to lead the van (v6); (d) A leader was chosen in the person of Joshua (v7-8); (e) Public notice was given of what God was about to do for them (v9-13) A miracle it was, and a great historic event when the Jordan was divided, and Israel was brought safely through over on the other side of the Jordan River.

As we make the connection through application of the Word of God, understand that God never changes. He is the same God today (present), as He was yesterday (past) and forever more will be the same (future). If you could just look up and look beyond where you are today in your current circumstances, your limitations, your past failures, your discouragements, sickness and your pain and just see what awaits you on the other side of your Jordan! Your MIRACLE awaits you! Your DOUBLE PORTION awaits you! There is HEALING in the water and an abundant supply of it that awaits you! Your MANTLE is about to be defined, and one also that cannot be denied!

My encouragement to you is, just as God was with Elisha, so shall He be with you. The tokens of His presence with Elisha, was the guaranteed seal that no one else could have gotten his miracle but him. Three things must be taken notice of (1) Elisha immediately gained Elijah's mantle; (2) He was possessed with twice as much power as that of Elijah so that he was able to now divide Jordan for his crossing over on the other side; (3) He showed as much interest as Elijah did in the people of God to teach them likewise and to pass on the inheritance to yet another generation. It was a convincing evidence that the spirit of Elijah and a double portion of the anointing was in fact upon him (Elisha).

God often would lead His people into places, and would allow set backs, and would even have His children to become 'limp and lifeless' in Him through all the discouragements and hurts, only to resuscitate us again  by the life giving breath of His Holy Spirit and to bring about MIRACLES of HEALING and of RESTORATION.  He often raise us back up in Him into new dimensions that the public notice of it, is to show to the world that beyond a shadow of a doubt only God could have done that thing in your life!

Elisha could have left his 'master,' teacher and companion Elijah the first opportunity given him at Bethel, (2 Kings 2:2); then at Jericho (2 Kings 2:4); and lastly at Jordan (2 Kings 2:6). But I believe it is recorded for our example and our teaching that no matter what, we must be willing to follow our Lord and Master, our Chief Commanding Officer, and our Saviour Jesus Christ. By following Him, wherever he leads us, we can be assured that we will cross over safely on the other side of our Jordan, the land that has been promised to us!

It has been such a wonderful blessing doing life with you. It is my prayer that you have been blessed in like manner. God bless you! Your miracle awaits you!
Posted by Unknown at Sunday, April 08, 2012