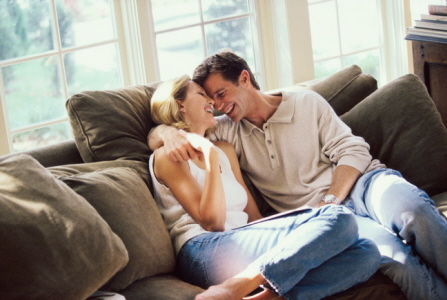 I ended my previos article "Let's Chit Chat: Just To Be Close.." by saying that God is the only source and giver of love. [And that] One must know God to know true, authentic, no strings attached love! What substantiates this truth you might ask? By the recalls of 1 John 4:7, it says, "Beloved, let us love one another: for love is of God; and every one that loveth is born of God, and knoweth God."

It is easy to comprehend then why some persons can fall out of love and break up with each other at the same speed of lightening with which they got together in the forst instance. Some have even gone as far as tying the knot only to wake up one morning and realized that they've made a huge mistake. In the interest of time and not making this column too lengthy, I refer you to an article I wrote entitled, "No Greater Love," where three different kinds of love (eros, philos and agape) were explained.

On that note I come to one of my big pet peeves, which is this - It baffles me how a guy could meet a girl for the very first time and would have the audosity to say to her, "I love you" and he is clueless about who she really is, her background etc. He may even try to take of her clothes with his eyes while they are out on their first date. Now let's assume the girl, unclear about his motive, succumbs to that kind of masked deception, and she becomes entangled in his web, you understasnd why some relationships are not working out today. Making a further assumption that they went ahead and got married, it's a marriage that is likely to fail from the start.


What really is the mesure of a man's love though? How do you really know if someone meant what they said and said what they meant? Is it possible when that person said, "I love you" they meant something totally different? These and other questions have been long debated, especially that we are witnessing increased divorce rates. Even in Christiandom it's happening - and if nothing else we are the church that should be setting the example for the world to follow.

This is by no means a justification, but in my case it was different. And here is how. Even though  neither of us at the time were in the Christian faith we never thought we would ever get divorced. It was not an instant overnight thing getting together. I gave him quite a bit of trouble at the beginning and then when we finally got together we dated/courted for approximately three and a half years. Some might say too long.

At the start of our marriage, we absolutely adored each other's intelligence and our strength - we were magnetically attracted to each other, we were inseperable as we took great care to spend qualtiy time together. He was a provider, a caregiver, protector etc. My experience with the love that came from his heart can best be described as unselfish, serene, peaceable, pure, passionate and euphoric.

Nonetheless, soon after our first six years (the best and most memorable) of the nineteen years we stayed married, cracks appeared in the relationship. My philosophy until this day is 'while money is necessary, and it's good to have lot's of it, it doesn't make me happy.'  His was, 'the harder I work to support my family, the more money I have, the happier my family would be.' I preferred the idea of ten hours max work day, he was, if I could max out the maximum, then that is best. I witnessed our most sacred day, Sunday when we would ensure our familiy sit down to breakfast, lunch and dinner time, church etc be replaced by the out spending time with the 'boys.' Then came the many hidden secrets, especially as it related to our finances. The marriage finally succumed to marital infidelity, physical and emotional abuse. By 2003, we were divorced.

How could something so right and so beautiful at the very start, end in such a way? I cannot pin it down to any one specific answer, except to say, I was left in a state of shock, disbelief and worry about whether I could trust my instincts for relationships such as intimacy and marriage in the future. The past is behind us and I know we've both learned from our mistakes and have taken responsibility for the role that we both played in the break up.

I am empowered by the lessons that I've learned and is doing whatever I can by what I share and the example of the life I live of not wanting anyone else to make the mistakes we made. It takes two, and according to Amos 3: 3 two must clearly be in agreement to walk together in unisom.

In my final article on this week's rleationship matters theme, I will be sharing with you key things to look for and to do in your relationships. While the list would not be an exhaustive one, it cannot be overlooked however that genuine friendship, true love and mutual respect forms the foundation of a successful relationship.

So on that note, let's stay connected right here on EMoments! A renewed mind equals personal empowerement!
Posted by Unknown at Thursday, January 17, 2013