Are you still hurting from the sticky residues of your past? Is your current relationship stoned-walled and in limbo simply because you find yourself still struggling with the thought of letting go of the ex and what he/she did to you? Do you find yourself in an abusive relationship saying 'I love him/her to death and I am not letting go no matter what!' If you have answered yes to any of the foregoing questions and is determined in your heart to be set free, it is not an accident that you are reading this post.

One of the great misconceptions of truth that I have discovered over the years and often times, one that leads to stigmatization of others, is that folks somehow associate 'letting go of the past' as a sign of your weakness. On the other hand, there are those who continually hold on and refuse to let go, not because they are not a strong individual but because, in their mind, it's the measure of their power and the amount of control they see themselves as having over a situation or over another individuals life.

But let me assure you, holding on to the sticky residues of your past will not help you one way or the other. It will hurt you more to hold on and eventually, it will lead to self destruction and will even damage others in the process. It will rob you of your joy and peace, not just for today but the years ahead of you. It destroys your self worth.

It blinds your mind of your future potential of what lies ahead for you. Harnessing negative behaviour, self destructive thoughts and ideas about those who may have contributed to the hurt and the pain is in itself a continuous cycle of abuse to yourself and the ones that you are refusing to let go. Un-forgiveness keeps you in bondage and captivity.

Here is an example as a case in point

Approximately two days ago, I was looking at a particular talk show on one of the popular TV networks. I was literally brought to tears in the process, as I began to feel the pain of the couple who had turned to that means to resolve their conflicts and their problems, to bring truth to light by lie detector tests and hopefully, healing to their marriage.

I listened keenly to both sides as they gave their version - the wife accusing her husband of cheating and the husband in turn swearing on his life that he was not. The result of the lie detector test was eventually given. It turned out that he passed with flying colours - that all three questions that were asked of him refuted his wife's claims that he had been cheating on her. The look on the wife's face, the shock and to a large extent I believe, the embarrassment was pretty obvious.

What's wrong with that picture? Does that sound familiar? I was saddened even more, while the tears continued to flow, when I heard the husband say to her, that for the four years they had been married, he had been trying to prove his love for her, but she won't let him because she kept on putting up a wall between them both.

The conclusive analysis drawn was that all this time she was living her past hurtful, painful life and bad experiences through her husband in the present. The truth somehow got twisted in her mind and she was seeing the ones who had hurt her instead of realizing how blessed she was having a loving and caring husband.

Letting go is not an option, but it is a necessity 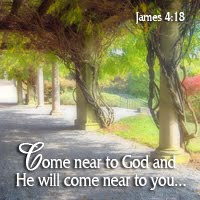 It is not always the truth that the past is the surest indicator of the future. You could have had a monster of a person last week but your prince shows up this week, proving even more that the foregoing statement is not always 100% right. Know that there will always be that small window where someone will come into your life at a specific time, for a specific reason, and for a specific purpose. Once that is over, God Himself has designed His plan in that way for your life and they will have to go when the time comes.

"A sad thing in life is that sometimes you meet someone who means a lot to you only to find out in the end that it was never bound to be and you just have to let go." ~ Dave Matthews Band

The thing is, whether it is a person or a specific situation that have left you in a state of brokenness and distrust, it is time to let go and be healed of your past.

God wants to heal you and make you whole again

He heals the broken hearted and binds up their wounds. He determines the number of the stars and calls them each by name. (Psalm 147:3-4)

1.) You must totally surrender yourself to God, to His will and His majestic power. Put your memory on the present day to day experiences. Take control over your every thought and give no power whatsoever to negative thoughts.

2.) Letting go means that you have taken responsibility for your own happiness and peace of mind. What happened to you in the past will not change but who and what you give power to can be changed if you just stop dwelling in the past.

3.) You become more open and ready for your healing when you stop justifying the anger both for the now and the years to come. Anger is a breeding ground for resentment, bitterness and hate, the root of which is hard to kill, except that is, you forgive and surrender completely to God.

4.) Time to let go especially when someone begins to place unrealistic expectations upon you and expect you to become someone you are not. Let that person go, let that situation go! It is advised, better to let go and loose someone in the process staying true to yourself and being who you were created by God to be than to try and hold on to someone being someone you were not meant to be.

5.) Harsh words are like an arrow shot from point blank range that damages your spirit man. You know that it is time to let go when you are repeatedly subjected to harsh, unkind, curse words and when someone's words consistently do not match their actions.

6.) Time to let go instead of begging someone not to leave you. If they want to go, let them go! Love is about freedom. You cannot force someone to love you and someone who is not in love with you will not give you the respect that you deserve.

7.) A relationship based purely on physical attraction and sex is a set up for failure from the beginning. There is more to you than just a beautiful face, a well shaped body and the number of heads you get to turn in your direction on passing by. This is a sure sign that you need to let go and be healed so that your true inner beauty, what's in your heart, integrity, honesty and all these wonderful attributes deep inside of you can begin to shine through you.

Wrap up and final thoughts:

There is so much more to be said but at the risk of making the post too lengthy I would end here. In and through it all though, be true to yourself and never let go of hope. Unimaginable things happening in your life is a strong possibility. Don't sit back and day dream, asking yourself why this or why that, getting depressed thinking that he/she will not leave or will come back to you. Just remember, with all that you have been through, you could not have made it to today, had it not been the God of salvation Jesus Christ on your side, with you and for you.