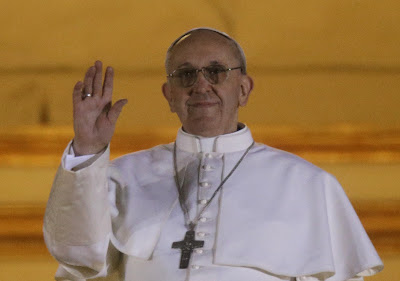 by Nicole Winfield
VATICAN CITY - Pope Francis revealed Friday that he never wanted to be pope and that he's living in the Vatican hotel for his "psychiatric" health.

Francis showed a personal and spontaneous side as he met with thousands of children from Jesuit schools across Italy and Albania. Tossing aside his prepared remarks, Francis surprised the kids by asking them if they'd like to ask him some questions instead.

"Yes!" they shouted to cheers and applause - and the concern of teachers who fretted that no one had prepared anything.

Answering their questions one by one, Francis told them the decision to become a priest had been difficult and that he had suffered "moments of interior darkness" when "you feel dry, without interior joy."

But he said he went ahead because he loved Christ.

One of the most touching moments came when Teresa, a bright-eyed redhead no more than six, asked Francis flat out if he had wanted to be pope.

Someone else asked him why he had renounced the papal apartments in the Apostolic Palace in favor of his spare suite in the Vatican hotel, where he has been living ever since the March conclave that elected him the first Jesuit pope and first pontiff from the Americas.

It wasn't so much a question of luxury as personality, he said. "I need to live among people,' he said. "If I was living alone, isolated, it wouldn't be good for me. A professor asked me the same question, 'why don't you go and live there, (in the Papal apartments)?' And I replied: "Listen to me professor, it is for psychiatric reasons," he said chuckling.

This week, the Vatican confirmed that Francis wouldn't vacation at the papal summer retreat at Castel Gandolofo, in the hills south of Rome, and would instead remain in the Santa Marta hotel with a reduced work schedule. Francis' predecessors have all decamped for at least a few weeks each summer to the estate, where the lush gardens, lakeside perch and cool breezes provide a welcome respite to the oppressive summer heat of Rome. The estate, which by acreage is bigger than Vatican City, is entirely walled in, making it a perfect estate for a pope who wants isolation and solitude - but not one who wants to eat breakfast with a group of fellow priests, as Francis does in the communal dining room of the Vatican hotel.

Francis has shown himself to be remarkably comfortable around children, taking up to an hour each Wednesday to greet mostly young people in the crowds at his general audience: He caresses and kisses the dozens of babies handed to him by his bodyguards; and he tousles the hair of older teens and pats them on the back, asking them to pray for him.

He showed a similar ease on Friday as he engaged in a good 30 minutes of banter with the schoolchildren, casually making the points he has made in his homilies and speeches: about the "scandal" of poverty and how the world frets when the stock market dips but cares nothing when a homeless person dies, and how everyone should learn a lesson from the poor.

Once or twice a year, Pope Benedict XVI would take questions from young people, but the questions were always submitted in advance so he could prepare an answer.

The questions on Friday were clearly spontaneous. One little boy from Sicily asked Francis if he had ever visited Sicily. (No, Francis said, but he recently saw a beautiful about the island) A teacher from Spain asked  the pope about "compromised" politicians. Francis said all Christians had an obligation to be involved in politics.

His final message to the kid was upbeat: "Don't let anyone rob you of hope."