When A Church Pastor Gets Fired But Refuses To Leave.... 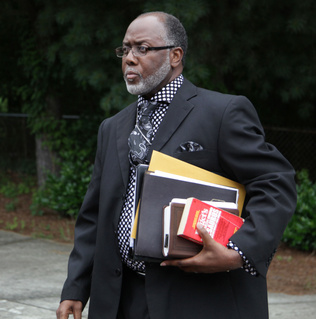 In every organization or institution there are rules that must be followed. When those rules are broken, there are consequences - a disciplinary process is adhered to. Many have guidelines set out in such a way that when the rules are broken by an employee the first time, s/he get a verbal warning. The second time around you are given a written warning. The third time around, hey, you are likely to get fired right? That's when employees break the rules.

But what happens when the leader himself do not adhere to the standard rules, or when his leadership style is not only challenged, but protested against? Who is he accountable to? Who takes disciplinary actions against him and who really fires the leader? What should really happen when that leader happens to be the church pastor, and presumably, the church bi-laws were not adhered to but yet he gets fired? Does God want us to take matters into our own hands?

That may be the case with one church pastor, as tensions ran high at a north Charlotte church this past Sunday morning.

According to The Charlotte Observer, church members at a Charlotte, N.C., church are protesting a pastor's leadership, saying he was fired months ago but won't leave his post. The pastor, Andrew Rollinson (pictured above) of Morningstar Baptist Church in North Charlotte, says he has no intention of leaving because the process the five church leaders used to fire him did not follow the church bylaws.
"I'm the pastor. I will be the pastor until people want to follow the bylaws," Rollinson said. "This is a group of irate individuals who want what they want and are not able to get it according to the bylaws, and they become irate." Although Rollinson did not say how members violated the bylaws, he said he has no intentions of leaving the church.

The letter to Rollinson is said to be dated April 28th and signed by five church leaders read in part, "Due to his character that is not becoming of a pastor, his dishonesty, controlling demeanor, using the pulpit to disrespect his members...we are removing Pastor Andrew J. Rollinson from his duties effective immediately. May God continue to bless you and your family and we hate things had to end this way."

This past Sunday morning, police were alerted and were parked outside the church before opposing sides of the argument faced one another before the service began. No one was arrested, and after a couple hours of shouts and protests, the two sides seemed to call a truce and go inside the building for services.

Jackie Black, chairman of the church's board of deacons, said the drama has distracted members from the church's vision. He also said he will involve the church's attorney in drafting the pastor's contract in the future. "We're going to make sure it's very specific so nobody can take advantage of us again," he said.

It is still not clear of the final outcome but my last questionable thoughts are these, are we as members of the body of Christ (church) responsible for placing our spiritual leaders and pastors on a pedestal or in a high place where there is not the grace of God available to keep them? What are the lessons to be learned from this as leaders and or church members?